GUYS, WE'VE GOT A SITUATION:  There is only hour hour left to spend in Gravity Falls, Oregon.
Posted by Adam at 12:09 PM 0 comments

WE'D NEVER HEARD OF A DUMP CLOSED ON THANKSGIVING BEFORE:  50 years ago. Happy Thanksgiving, everyone! 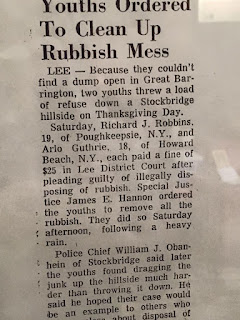 SLACK, MOTHERF...  Andrew Raff has been kind enough to set up a Slack channel to accompany the site, for real-time chatting and linking in a private setting. You can sign up here.
Posted by Adam at 8:22 AM 0 comments

Email ThisBlogThis!Share to TwitterShare to FacebookShare to Pinterest
ARE YOU NOT ENTERTAINED?  Your EW Entertainer of the Year is Jennifer Lawrence, which, honestly, is a bit odd, given that her only projects this year have been Mockingjay Part 2 and Joy (and the much-delayed, minimally released, and critically derided Serena).  Runners-up are Chris Pratt, Adele, Taraji P. Henson, Aziz Ansari, Game of Thrones, Nicki Minaj. Amy Schumer, John Oliver, Lin-Manuel Miranda, Shondaland, Taylor Swift, Elizabeth Banks, the cast of Straight Outta Compton, and Caitlyn Jenner.
Posted by Matt at 4:02 PM 0 comments

THE MEH WIFE: I wanted to talk a little bit about this season of The Good Wife.  Yes, the show continues to have a lot of good parts, and many of the additions this season have been fine (Jeffrey Dean Morgan, Character Actress Margo Martindale, and Cush Jumbo, who has dethroned Emily Wickersham in the category of "CBS actress whose name is most fun to say").  That said, it's felt as though that while the individual storylines are generally well-executed, each week's various narrative threads rarely coalesce into something larger.  Cary and Diane are off in their own show (which, honestly, I'd watch without hesitation), Peter is busy running the campaign Martin O'Malley thought he was going to, and Alicia is doing the small firm thing again (unless narrative calls upon her to do something else, like somehow be appointed to an elections board after resigning a position due to election fraud).  It reminds me of how The Love Boat was written, with different writing teams writing each segment, and then some very mild loose connective tissue thrown in at the last second.

It's widely speculated this is the show's last year, and I'm hoping they're actually building to something rather than chasing their tail to get to a pre-planned ending.  (I also wonder if Baranski and Czuchry might've taken the "wrong" side in whatever the drama relating to Archie Panjabi was, but were still under contract and are now being punished by being shunted into their own show.)
Posted by Matt at 9:24 AM 0 comments

YES, APPARENTLY, WE CAN HEAR YOU:  The NYT reports that Adele's 25 "seems set to sell at least 2.5 million copies in the United States in its first week. That would be the highest weekly sales for any album since at least 1991," when they started tracking via Soundscan. "No album has sold at this scale since ’N Sync moved 2.4 million copies of “No Strings Attached” in 2000 — a time when annual CD sales were more than five times greater than they are now."