AMERICAN (HIGHWAY) GOTHIC:  The Federal government is backtracking away from Clearview, the typeface it adopted in 2004 for federal highway signs, and has re-adopted Highway Gothic.  I much prefer the classic typeface -- not only because I am a reactionary when it comes to changes on the highway (California only adopted mileage-based Exit Numbers in the last 10 to 15 years) -- if it was good enough for Tower of Power, it's good enough for me. 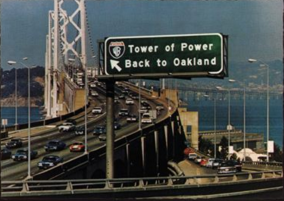 Posted by The Pathetic Earthling at 10:55 AM 0 comments

OR ARE YOU JUST HAVING FUN?  Ready to go down a rabbit hole? Vulture's Maura Johnston has ranked all 168 finalists in American Idol history, and there is much Youtubage you will want to explore and re-connect with involving many names with lively, lively eyes whom we haven't discussed here in years. Andrew Garcia! Siobhan Magnus! school teacher Anwar Robinson! promiscuous eye-fucker Constantine Maroulis! bearded wonder Casey Abrams! Yeah, stuff like that.
Posted by Adam at 6:10 PM 0 comments

Email ThisBlogThis!Share to TwitterShare to FacebookShare to Pinterest
TO TOUCH THE FACE OF GOD: Thirty years ago today, I was sitting in my eighth grade Unified Math class when the news came in. The Challenger had exploded, and all on board were dead.** To many of us, it was our Kennedy Assassination, our generation-defining-where-were-you-when until 9/11, when faith in our institutions, in science, in progress, got knocked around quite a bit. (Among my peers, the immediate speculation was that Arafat had to be behind some kind of bombing.)

Today, we remember the fallen, and I, at least, hope to see our non-terrestrial ambitions rise again.

** As we've previously discussed, there had also been talks about Big Bird joining the mission.
Posted by Adam at 11:28 AM 0 comments

WELL, LET'S JUST SAY IT'S FILLED WITH SYMBOLISM AND THINGS LIKE THAT:  My recent discovery of a delightful Unbreakable Kimmy Schmidt/Mad Max: Fury Road trailer is just the slender reed I need to open up a long-delayed holy shit, Fury Road was awesome discussion thread here, because part of what Blizzapocalypse 2016 wrought was the opportunity I needed to watch it finally.

And, um, yeah. You get slammed in media res and by golly, it's a hell of a race. I don't want to spoil anything plot-wise (let's save that for comments), but, seriously, what a gorgeous movie. I think I'd have to go back to some of my favorite Baz Luhrmann films (another Aussie, go figure) to find a film where it felt like this much thought was put into every nook and cranny.  Highly, highly recommended.
Posted by Adam at 5:06 PM 0 comments

ALOTT5MA PREMORSE HALL OF FAME:  According to the Associated Press, character actor Abe Vigoda is, finally, no more.
Posted by Adam at 2:20 PM 0 comments

Email ThisBlogThis!Share to TwitterShare to FacebookShare to Pinterest
NOT, IN FACT, A MAD LIB:  Woody Allen's Amazon series will star Elaine May and Miley Cyrus opposite Allen.
Posted by Matt at 5:27 PM 0 comments


In the classic three Disney princess films, women speak as much as, or more than the men. “Snow White” is about 50-50. “Cinderella” is 60-40. And in “Sleeping Beauty,” women deliver a whopping 71 percent of the dialogue. Though these were films created over 50 years ago, they give ample opportunity for women to have their voices heard.